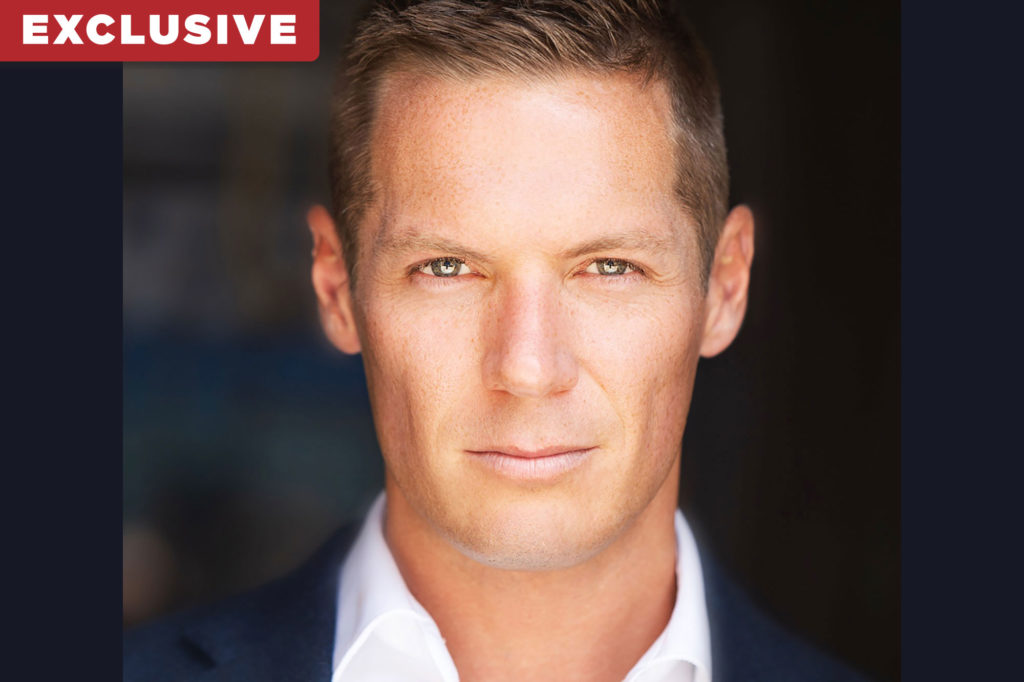 On a sweltering, high-octane, festive summer evening at Omar’s, Manhattan’s de rigueur late-night glitterati spot and my much beloved personal HQ for all privé nocturnal exploits, my very close friend Brad Alphonso insisted I meet his good buddy and fellow military vet he knew from New Orleans, Jake Thomas. From the moment Brad pointed him out across the dark, spectacularly fabulous room, I could tell the man was ex-military, probably a Marine. I have another very good friend and former Navy Seal, Tait Reimers, who shares a lot of the initial, surface character traits that Brad and Jake also have in abundance: good posture, unflinching eye contact, an aura of there’s-nothing-I-can’t-solve-can-do-ness about them. It’s a good look to be sure.

Looking a little out of his element for a whole three minutes, Jake and I became fast confidants, as we talked about all things at once, but mostly our mutual love for New Orleans (I graduated from Tulane University in N’awlins and consider the Crescent City America’s most fascinating metropolis). Impossibly, by the time that summer evening turned to morning, we were undeniably forever connected.

Jake Thomas’ background is as interesting as you’d imagine it to be. Born and raised in New Orleans, his professional experiences have taken him from excavating the Gulf of Mexico and West Texas oilfields to serving as the marketing director of a high-end artisanal furniture designer. That’s not too surprising if you’re ever in Jake’s presence and feel his indefatigable, infectious energy at close proximity. But it’s his proud service in the US Marine Corps that has colored his outlook most and, he says, he lives by the its famed core values of honor, courage and commitment. It’s easy to believe him.

A summa cum laude graduate and co-valedictorian from the Fashion Institute of Technology (FIT) with a Bachelor’s degree (BS) in International Trade & Marketing as well as having a Master of Business for Veterans (MBV) from the University of Southern California Marshall School of Business where he was also a member of the Salute Veterans National Honor Society, Jake takes education—hell, he takes everything—seriously. Doesn’t matter what Jake is doing, he’s always pushing the limits on what’s seemingly possible. His comfort zone begins where everyone else’s ends. Unlike most of us, challenge, obstacle, conflict are the words that drive Jake and, clearly, get him amped for success. Complacency, or simply chilling out, aren’t in the cards for this driven human being.

“I’ve had to take my fair share of chances and have not succeeded at everything, but that’s all part of the ride. I tell people that the adventure has never been the attraction for me. Sure, it’s an indirect benefit to my own self exploration, but I do what I do because it’s what I must in order to survive.”

It’s also impossible not to notice the man’s physique. I mean, Jake has a body that fully makes a mockery of that classic gym nugget: “Hey, bro, do you even lift?” Not surprisingly, Jake pushes his fitness as hard as he pushes himself in all other areas. Back in 2015, Jake was approached at his gym and asked if he’d ever considered becoming a fitness model. Without a moment’s hesitation, he said, “Let’s do it!” Since that time, Jake’s been featured in dozens of exercise videos, magazines (Men’s Health, GQ), walked the runaway during New York Fashion Week, secured global representation and booked substantial work throughout North America. He also competed in the 2019 Natural Bodybuilding World Championships as a vegan. Not easy to do, folks. And that’s just his side hustle.

Jake’s main gig is being a successful New York City real estate agent with Cooper & Cooper (everyone knows how lucrative successful real estate agents can be in Gotham), but it’s his latest side hustle, as lead actor in an Off-Broadway production that has him most excited right now. As the protagonist in Case Closed: The Dorian Corey Story at the Gene Frankel Theatre in Manhattan running from September 10 to October 10, 2021, Jake has once again met this seemingly impossible challenge head-on. Of course the former Marine, real estate agent-cum-bodybuilder wins the lead in a true story live theater production in the planet’s epicenter of thespian pursuits. Why wouldn’t he?

The feeling of Jake’s way-too-much-at-once never happens upon meeting the polite Southern gent. He’s effortlessly present, respectful, optimistic and charming. Not sure what percentage credit of that goes to his parents, his hometown or his military officers, but when you’re in Jake Thomas’ air space, folks, good things—and lots of laughs—are the order of the day. And there’s nothing wrong with that.

If you can’t tell by now, Jake and I have remained tight (even though his undying love for the New Orleans Saints conflicts with my fervor for the Miami Dolphins) and we share a love of movies (he can literally recite monologues from hundreds of Hollywood classics. It’s unnerving, actually). He’s also the most passionate and knowledgeable soccer (fútbol) American-born fan I’ve ever known, including former professional soccer players!

I caught up with my amigo recently to ask him a bunch of things I wanted to find out, not the least of which was inquiring about why he never takes supplements as part of his health and wellness routine. Micro dosing, he says, is a whole separate matter.

From that first moment we started chatting at Omar’s all those years ago, I knew this guy was much more than the sum of his parts. Jake Thomas was and remains the complete package—and he’s just getting started. What will Jake Thomas do next?

Hey, Rich! Yeah, you’re right. It’s been quite a trip, no? It’s all been a joy and most of it I never really planned on, but certainly haven’t shied away from the opportunities which have come my way. I’ve had to take my fair share of chances and have not succeeded at everything, but that’s all part of the ride. I tell people that the adventure has never been the attraction for me. Sure, it’s an indirect benefit to my own self exploration, but I do what I do because it’s what I must in order to survive.

Briefly walk us through the pre-New York City years where you were mostly in New Orleans and México, right?

Yeah, that’s right. I was born and raised in New Orleans. Who dat, baby?! [Laughs] Educated by Jesuits, I’m a first-generation American son of a Mexican-born mother. I also used to live in the quiet “Pueblo Mágico” town of Pátzcuaro, Michoacán.

Your body’s transformation from being a fit guy to being unbelievably shredded couldn’t have been an easy road. What has that experience been like for you?

It’s been an interesting one to say the least. The common denominator is the simple fact that the human body is the most incredible and powerful machine on Earth. Ironically, it’s also the most fragile. Over the years, and more and more each day, I better understand the importance of quality sustenance, physical and spiritual nutrition, rest and the all-encompassing power of the mind. For the mind can live without the body, but the body cannot live without the mind.

Tell me about your supplements: Any CBD or functional mushrooms? How about micro dosing?

I’ve been 100 percent “bro-supps” free for years. No pre-workout, no protein— nothing. I source all my macronutrients from whole, nutrient dense foods. I have, however, been cyclically micro dosing psilocybin mushrooms for more than a year. Mushrooms are one of Mother Nature’s greatest teachers. And, when used correctly, can truly do wonders.

I remember when we first met, you were always so consistent in your vision for your life. When “experts” in whatever field you wanted to conquer said “no,” you said, “watch me.” Where does that optimistic, can-do attitude come from?

[Laughs] I’m glad that stuck, Rich! Where that mindset specifically comes from is tough to say, but, for as long as I can remember, I’ve always been that way. Maybe it was being smaller and shorter than everyone else as a kid and feeling a compelling need to prove people wrong despite my size. Looking back, each big chapter in my life exemplifies that. Being in the Marine Corps, the oil fields, México, FIT, USC, modeling, Manhattan real estate—all of them were total vertical slopes for me. I read somewhere a passage about two types of climbers. There are those who look up the mountain from its base and wonder how they’re going to get to the top. And then, there are others who look up from the bottom and see themselves standing on the summit looking over the world. I’ve always been the guy looking over the world

Jake, you and I also share a similar sense of humor and obvious good looks [Laughs], but we also share in the fundamental belief that kindness must and will prevail in the end. Fair?

Yes! 100 percent! The world has no shortage of assholes with pretty faces. Real, genuine, pure, kind, honest people are what it could always use more of and needs.

Talk to me about the lead character you’re playing in Case Closed: The Dorian Corey Story. Can you even wrap your head around this opportunity?

Paul Dombrowski is a mid-1990s New York City police detective with blue eyes, classically chiseled features and a well-built physique. Upon first glance at the description I thought, “I mean…I think I could play that guy!” [Laughs] He’s pitted with trying to solve the murder of a mummified corpse that was found in famed drag performer, Dorian Corey’s, closet upon her death. Best part of this crazy tale? It’s a true story! I still can’t believe it, in some ways. I’m as excited as I’ve ever been and hope everyone comes out to see it.

Jake, as a master of many trades, what really excites you as you look down the road at your life? You can’t continue to spin so many plates so well at once, can you?

Continuing to fail and finding out again and again how little I really know is precisely how I live my life. I’m in love with my real estate career. Meeting people, hearing their stories, knowing they may rely so strongly on me, and eventually finding them a new home where they will laugh, cry, celebrate and make memories—that gives me great joy. But a life fully lived is meant to have challenges, no?

Is your health and wellness at the root of everything you hope to achieve?

Without my health, there’s nothing else. As advised during every airline’s safety brief prior to takeoff, “Put your mask on first; then, offer assistance.” We’re always better to others when we are best to ourselves.

Complete this sentence: In five years Jake Thomas is…

Right where he is supposed to be—on top.