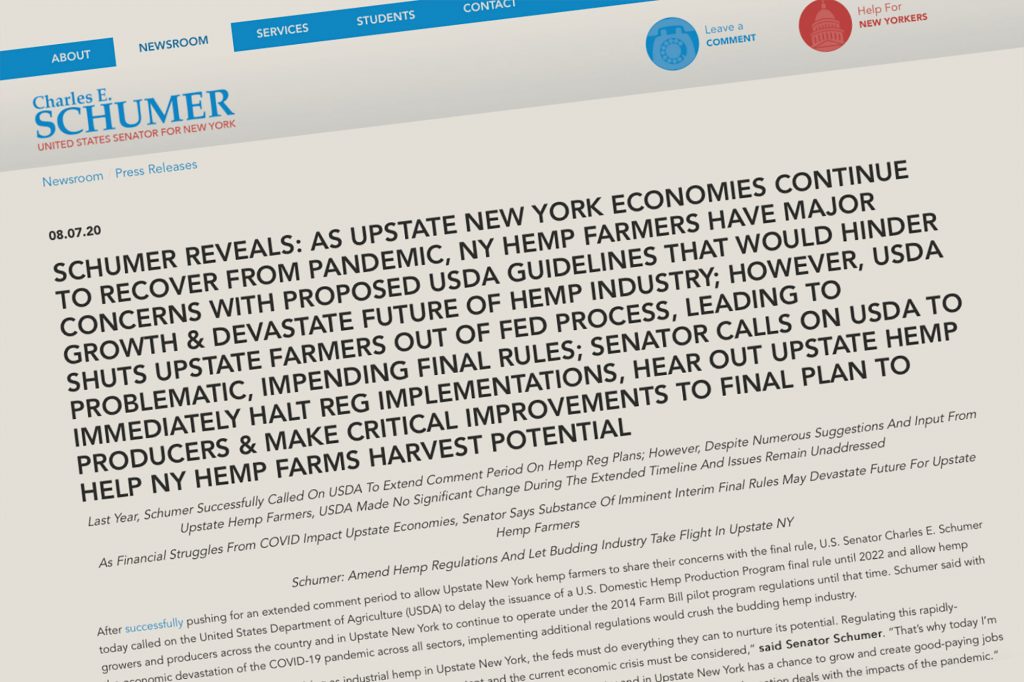 The hemp industry seems to have found an ally in US Sen. Chuck Schumer, who’s pushing for the USDA to delay the enforcement of the new hemp production rules. The senior ranking Democrat in the Senate has asked the US Department of Agriculture to delay issuing the final regulations for hemp production until 2022. Sen. Schumer has cited the concerns of stakeholders and the various challenges that are still present when it comes to state compliance issues, which have risen, especially after the outbreak of COVID-19.

The senator minority leader made his concerns known in a letter that was addressed to the Agriculture Secretary Sonny Perdue. The letter asked the agriculture secretary to allow hemp farmers in various US states to continue to operate under a regulatory pilot program. This program was established under the 2014 Farm Bill and is being pushed by Sen. Schumer to allow the department can get feedback on the interim rules for the broader program and make any necessary adjustments.

Sen. Schumer made it clear in his letter that the delaying of the final rule until no sooner than 2022 will have a positive impact on the hemp industry. Furthermore, it will allow the hemp industry across the country, including Upstate New York, to grow their businesses and create new jobs at the same time. The senator has stressed on the importance of letting those who are already operating within the hemp industry create new well-paying jobs, which is the need of the hour, especially since the Coronavirus pandemic has devastated businesses across the US.

The delays in regulation will help create much-needed jobs at a time when jobs are needed the most. If the USDA goes with Sen. Schumer’s recommendation, it will without a doubt have a positive impact not just on the US job market, but on the overall economy of a country that is already struggling to maintain its position in the global market thanks to the Coronavirus.

Having Sen. Schumer state the case for those in the hemp industry is great news for farmers who are already finding it extremely difficult to integrate the interim final rules into their existing production model. Farmers not just in New York, but across several other states have expressed their concerns over the release of the final rules by the USDA.

Many farmers and producers who are already struggling state that the finalization of the new rules by the USDA will plunge their businesses into further economic uncertainty. Furthermore, there are many experts within the hemp industry who agree with Senator Schumer’s assessment that rushing forward to implement the final rule for hemp production is only going to exacerbate the negative impact of the Coronavirus pandemic. This could result in the hemp industry in the US spiraling down and left unable to recover for years. The USDA has not yet released a statement addressing Sen. Schumer’s concerns.