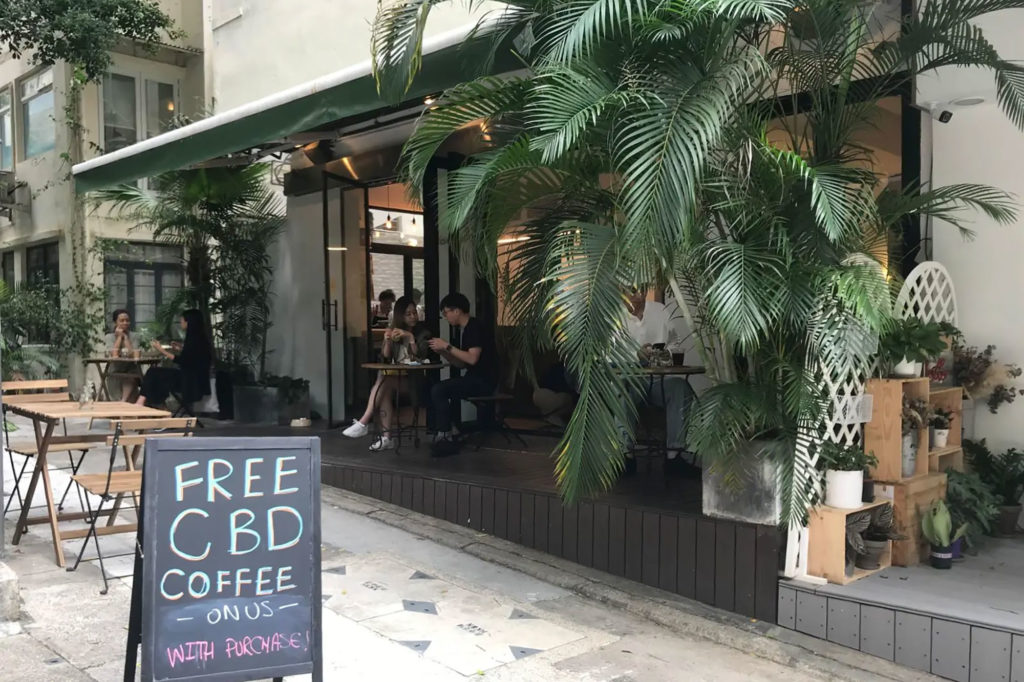 Of course, as everywhere else on the planet, CBD has become a hot new trend in Hong Kong, and people are loving it. The city’s first CBD café, Found, was opened this year. Soon, it became the main catalyst for many other CBD-based cafés and shops in the city. In the same year, the first CBD spa in Hong Kong opened, Cannable. In October 2021, the first CBD bar in Hong Kong, Unbothered, opened its doors in the Lan Kwai Fong party district.

Found café’s flagship store is located in Tai On Terrace, Sheung Wan, and has expanded to six more locations in Hong Kong already. It’s a quaint spot that features cha chaan tang interior décor. Many customers that walk in say they’re delighted by the greenery in the store and the overall soothing atmosphere. The café offers a variety of coffee drinks, hot chocolates and snacks, all infused with CBD.

Hong Kong government’s Center for Food and Safety specifies that cannabis’ illicit import or import of similar products that contain any controlled traces of cannabinoids are considered a criminal offense under the Dangerous Drugs Ordinance. However, when it comes to CBD, which is classified as a cannabinoid, Hong Kong law doesn’t recognize it as a dangerous drug. However, it’s still illegal in many countries around the world.

Found café is, of course, a legal business. It gets around the local laws outlawing cannabis because none of the items on their menu contain Tetrahydrocannabinol (THC), the psychoactive element that results in the “high” from cannabis. Cannabis is only legal in Hong Kong if it contains zero percent traces of THC (by way of comparison, in the US, the extract is considered “CBD” if a product contains three percent or less THC.

Altum Asia Limited is the company behind Found café. “Hong Kong is actually one of Asia’s most progressive cannabinoid markets, Fiachra Mullen, Found’s co-founder, says. “Unlike other parts of the region—Australia, New Zealand, Singapore—it’s quite a progressive cannabinoid law in Hong Kong, so we can sell most cannabinoids here as foods as long as we don’t have any THC in the products.”

All that CBD goodness doesn’t come cheap, however. An espresso coffee costs HK$40 (around $5US), with a cold brew going up to HK$75 (around $10US). Both contain 30mg of LIFE CBD. Found also offers a delicious Mango Mint Kombucha. Even their water contains CBD with a squeeze of fresh lime, and they also have cookies, energy balls and bars jam-packed with interesting flavors and combinations.

Found café sells other CBD products ranging from pet care to sleep. Needless to say, business is booming at Found.