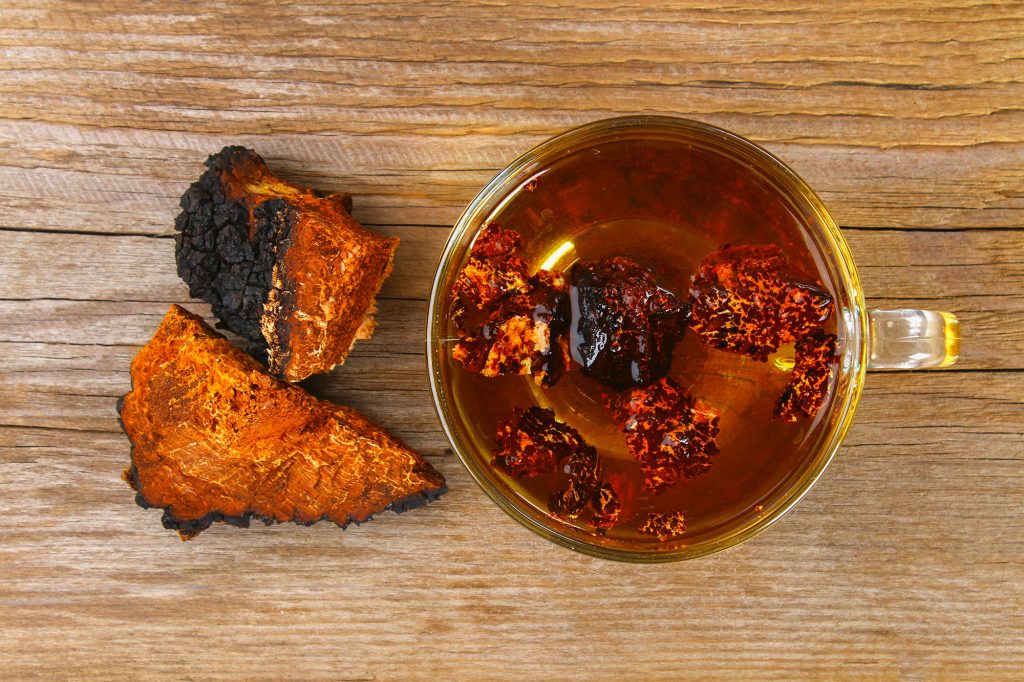 For those of you who are unaware, Chaga is a type of shelf mushroom, also known as a polypore or conk. The mushroom protrudes from tree trunks and doesn’t share the same mushy texture as other mushrooms. Chaga can be described as being “woody,” and because of its unique texture, it’s held in high regard in China and Russia.

Where Does Chaga Grow And What Does It Look Like?

Chaga resembles a burnt blister, or as the Cree describe it, a scab that grows along the trunk of a birch tree. But, the portion of the fungi that is harvested is two-toned and looks almost cork-like with a black crust and golden brown interior. The ratio of brown in the interior is an indicator of how young or old the mushroom is. Since the texture of this mushroom is coarse and porous, it needs to be cut with a knife.

Is it A Good Idea To Eat Chaga?

Because of its hard texture, it’s not advised to eat Chaga as you would other mushrooms. Also, since its texture is like cork, it needs to go through an extraction process so that the compounds within it can be bioavailable. In short, it’s not recommended that you add ground Chaga to your milk smoothie or tea. Instead, the most common way of consuming Chaga is by using it as a tea. Properly brewed Chaga tea has a smooth, nicely balanced taste.

Since Chaga is gaining popularity among functional mushrooms, many people also use it as a tincture. There are also many health supplements and tea brands that use Chaga in their products. The mushroom is also used to add flavor to cuisine and deserts in health-centric or organic restaurants.

One of the major reasons behind the growing popularity of Chaga is because it’s considered to be a cousin to other medicinal conks such as reishi. This means Chaga comes with both curative and preventive properties. The most notable health benefit of using Chaga is its well documented antioxidant properties. To get an idea of just how good a source Chaga is when it comes to antioxidants, you need to compare it to blueberries.

Most people have already heard that blueberry is a superfood that measures 24 on the ORAC scale. This is the scale for oxygen, Radical, Absorption Capacity. Chaga, on the other hand, can measure 36,000 on the ORAC scale, depending on where it was harvested. So, it’s easy to see that Chaga is a much better source of antioxidants.

Chaga is also considered to be a rich source of Vitamin D, Vitamin B complex, zinc, copper, potassium, selenium, magnesium, manganese, calcium, and iron. The mushroom is commonly used to balance out blood pressure and blood sugar levels and to relieve pain caused by inflammation.