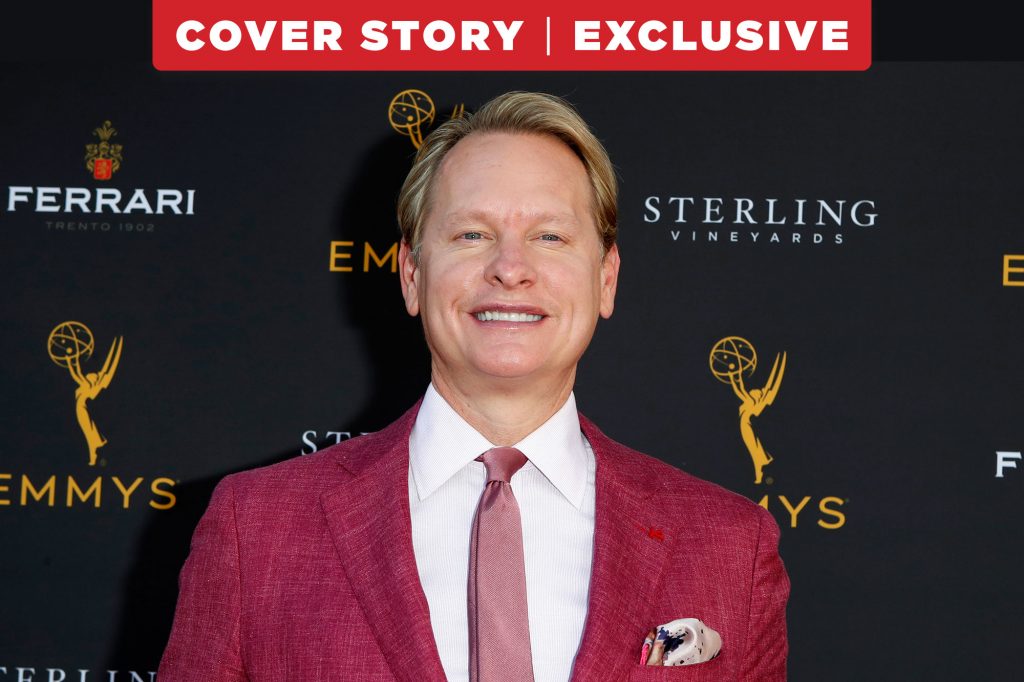 EXCLUSIVE Genuine is the first word that came to mind moments after meeting Carson Kressley some 17 years ago. The newly minted breakout star of the award-winning NBC/Bravo smash hit, Queer Eye For The Straight Guy, and I were the first to arrive at a pre-Emmy Awards cocktail hour at the fabled Hollywood landmark, Chateau Marmont. “Who have we here?” was Kressley’s engaging initial words as he approached me on the sofa in the hotel’s famed shabby-chic lobby. As a longtime guest of the Chateau—and quite familiar with all of its inherent insider-y clubhouse, unwritten rules—I felt comfortable on my home turf as the chatty star happily plopped himself right next to me. Wow, Carson Kressley is a lot. I mean, a lot. And I was all about it.

As someone who himself has been (accurately) accused of being “a lot,” at first, I didn’t know how to handle the friendly/hilarious/self-effacing force of nature that was in my presence, until I, too, became a lot right back. And there we were, side by side, inside this sacred institution (celebrity hallowed ground), literally screaming with laughter at each other’s jokes and catty observations. I mean, we were not subtle in the slightest. I even remember being a bit light-headed from all the hijinks Kressley and I spearheaded.

The amped up fun very much continued as a couple of the other members of the “Fab Five”—grooming guru Kyan Douglas and interior designer Thom Filicia—arrived to enhance the joyous occasion. But that Carson Kressley, I thought to myself as we all bro-hugged and went our separate ways a couple of hours later, now, he’s something else. What a rock star. Nearly two decades since that unforgettable night, I’m very happy to report I wasn’t wrong in my assessment of Kressley; not then, not now. Rock star all the way.

The well-educated star—he graduated with dual degrees in Fine Arts and Finance—is nothing short of a world-class equestrian largely because his family’s business involved raising ponies and he began competing at equestrian events at a very young age.

I’ve kept in frequent touch with Kressley over the years in both LA and NYC and, despite the cliché, he remains one of the most genuine, kindest people I’ve ever known. Here’s the thing with Kressley: his humor, his brilliant mind, his comic timing have all sharpened with age. He’s become a better version of the Carson Kressley I loved all those years ago. That’s the essence why when anyone spies Kressley on their television sets, we all, collectively and without hesitation, smile at the screen. C’mon, who in the world doesn’t love Carson Kressley? I mean, the guy is joy and laughter personified dressed up in colorful couture pants and fancy Italian shoes. Sheer TV perfection.

Carson Kressley was one of two children born in Allentown, PA to Barbara and Willard Kressley (sister, Diana). Now, for a surprising fact about the technicolor TV personality you may not have known: Kressley is a bonafide horseman. The well-educated star—he graduated with dual degrees in Fine Arts and Finance—is nothing short of a world-class equestrian largely because his family’s business involved raising ponies and he began competing at equestrian events at a very young age. When he was five years old, Kressley owned his first horse, which he promptly named Sparky.

Kressley credits his comfort around all kinds of people to his lifelong participation in horse shows. In fact, he says, his love of horses made him a “people person,” a valuable skillset in his chosen profession. His competitive side was in full effect in 1999 when Kressley became one of the members of the US World Cup Saddle Seat Equitation Team and, again in 2009, when he won the world championship. Bonafide horseman, indeed.

“I was introduced to a CBD supplement company that really changed my view of the effectiveness and science behind high quality CBD products.”

Fashion was Kressley’s other passion, and he eventually secured an executive menswear position at Ralph Lauren in New York City, a post he held through 2002. A few months after leaving Ralph Lauren, America (and the world) got to know and fell in love with Kressley and his co-stars and the dizzying whirl of instant global stardom took over Kressley’s life. The show wasn’t only a ratings mega hit for the fledgling Bravo network, it was a critical smash, too, culminating with winning an Emmy in 2004.

To list all of the television shows, appearances and other high-profile roles Kressley has starred in—everything from hosting How To Look Good Naked (Lifetime TV’s highest rated program) to co-hosting Get A Room With Carson & Thom (with OG Fab Five, Thom Filicia on Bravo), he perhaps is best known to a whole new generation of TV lovers today as one of the permanent judges on another runaway commercial and critical darling, another Emmy Award-winning show, RuPaul’s Drag Race. I warned you, when it comes to Carson Kressley, everything is a lot, but a lot of incredibly impressive accomplishments laced with lots of humor and a huge heart.

The last time I ran into Kressley, we made plans to meet up to chat for this story, but, as everyone on the planet is painfully aware, the COVID-19 pandemic has changed everything. So, instead, we caught up with the fashionable star and gentleman farmer stylishly socially distancing at his Pennsylvania farmhouse where he’s able to ride the coronavirus crisis out with close family members and his beloved horses. When the talk turned to his new-found affinity for CBD products, he’s quick to say that he also has had success giving CBD products to his horses. I think that requires to hear from the man himself.

You know, nearly 20 years later, Carson Kressley is still one of the very few people in my life who can literally make me laugh until it hurts. What a gift. What a man. What a friggin’ rock star.

First of all, how are you during this insane time we’re all going through?

Well, I have to hunker down at my farm in Pennsylvania. Fortunately, it has been a great place to ride out the storm—no pun intended—and spend some time with very close family and my horses. Both have been very therapeutic and calming in this uncertain time.

So, I hear you’re a fan of some CBD products for yourself and your horses.

Yes, I’ve always been a cannabis fan, and I really find that good quality CBD products really work for both me and my equine athletes.

Who introduced you to CBD products?

Actually, I went to a dinner party hosted by Adam Glassman [O, The Oprah Magazine’s Creative Director] and he introduced me to a CBD supplement company that really changed my view of the effectiveness and science behind high quality CBD products.

Are you excited for the new season of RuPaul’s Drag Race? Can you believe the show has won so many Emmys?

I’ve been so lucky to have been a part of RuPaul’s Drag Race for the last six seasons and I’m very excited about our current season 12. All of the contestants are amazing in their own way and it’s a very close race each and every episode. Be sure to watch every Friday night on VH1!

For those who are still nervous about trying CBD products, you say what to them?

I was nervous as well because no one really explained to me what CBD actually was and how it’s different from cannabis that, unlike CBD products, can make you high. But if you do some research, you’ll find a product that you’ll be comfortable with. And one that will hopefully be very effective.

Any exciting projects you’re working on?

Yes! I’m always working on fun stuff. Of course, there’s RuPaul’s Drag Race Season 12 airing now, but there’s also a fantastic season of RuPaul’s Drag Race all-stars coming out later this year on Showtime. I have a new book project in the works, some fun interior design show houses coming up in the fall and some fun television projects for the Food Network. So, stay tuned!